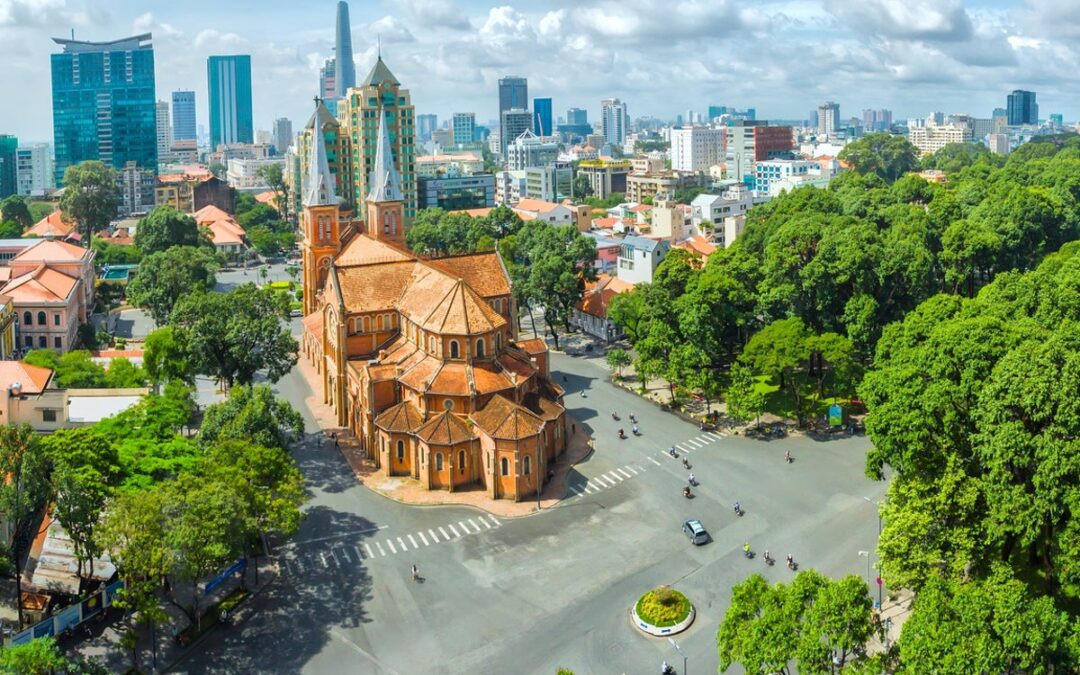 Vietnam’s property market remains fundamentally strong, buoyed by real owner-occupier demand which has been resilient despite the pandemic.

The price increases “showed that developers’ [were able to] insist on their prices, given the scarcity of supply and the healthy demand from owner-occupiers,” said JLL. The entrance of Phase 1 Galleria of Metropoles Thu Thiem, a luxury project in District 2, and the price increase in some projects such as One Verandah, and Giai Viet Central Premium have together raised the average market price in HCMC, added JLL.

Likewise in Hanoi, property prices have been continuously rising, albeit at a slower pace. The average price of apartments in the capital rose by 4.9% y-o-y (1.7% inflation-adjusted) to US$1,493 per sq. m. in Q2 2020. On a quarterly basis, prices increased 1.3% during the latest quarter (2.2% inflation-adjusted).

Vietnam is now widely seen as the next luxury property market hotspot, with a booming economy, coupled with laws that recently have made it easier for foreigners to purchase property. As a result, wealthy international investors have been flocking into the country in recent years.

Sales have been greatly assisted by the Housing Law and Law on Real Estate Business (effective July 1, 2015), by the law on Sell and Transfer of Real Properties (subsequently fleshed out by Decree No 99 (effective December 10, 2015) and by Circular 19 (effective August 2016). Moreover, the Comprehensive and Progressive Agreement for Trans-Pacific Partnership (CPTPP), officially came into force in January 14, 2019, is also expected to attract more foreign investors.

Vietnam’s improving infrastructure is also a plus factor. “Vietnam focuses on investment in infrastructure including 2,000 km of new highways, subway systems in Hanoi and Ho Chi Minh City, and many airport expansion and construction projects,” said JLL.

The Vietnamese economy grew by a meagre 0.36% in Q2 2020 from a year earlier, a sharp deceleration from the prior year’s 6.73% growth, as economic activity has been hampered by the coronavirus outbreak, according to the country’s statistics department. It was the slowest y-o-y expansion since the series began in 2000. Recently, the IMF has forecast that Vietnam’s economic growth will slow to 2.7% this year, down from 2019’s robust growth of 7%. However, Prime Minister Nguyen Xuan Phuc is still targeting  growth above 5% this year.

Foreign residents in Vietnam are permitted to purchase dwelling houses and can own the house but not the land on which it is built.

The homeownership rate in Vietnam exceeds 90% – one of the highest rates in the world.

“We have more and more very rich Vietnamese, particularly entrepreneurs looking for places to put their money,” said Niel MacGregor of Savills Vietnam.

One of the main factors driving demand is the shift away from the Asian tradition of several generations living under one roof.

“We’re seeing a significant change, where young couples prefer to escape from their parents after marriage,” said Duong Thuy Dung of CBRE. “They like to buy condos in gated communities.”

In Hanoi, apartment sales transactions totaled 5,298 units in Q2 2020, up 30.6% from the previous quarter, according to JLL. However, it remains lower than the average quarterly sales recorded in 2015 to 2019. The improvement in sales was mainly driven by real demand from owner-occupiers. The affordable and mid-end segments, priced between US$1,200 to US$1,800 per sq. M., accounted for the majority of sales during the period. Vinhomes Ocean Park had the biggest share, with 48.3% of sales in Q2.

In HCMC, apartment sales transactions totaled 3,855 units in Q2 2020, twice sales in the previous quarter and almost at par with Q2 2019, based on figures from JLL. Similar to Hanoi, the affordable and mid-end segments accounted for about 83% of total units sold during the quarter. Investors remain cautious due to uncertainties surrounding the COVID-19 pandemic.

Supply has fallen in HCMC, only slightly in Hanoi

In Hanoi, the completion of 5 new apartment projects and the next phases of 7 existing projects provided about 6,200 units in Q2 2020, up 28% from the previous quarter but down by 6% from a year ago, according to Savills.

In HCMC, 4 new projects and 10 next phases of existing projects supplied 2,100 apartment units in Q2 2020, down 55% from the previous quarter and by 74% from a year earlier. Seven planned launches has been postponed to H2 due to the pandemic.

As things are slowly going back to normal, about 30,000 apartment units in HCMC are expected to enter the market in the second half of 2020, in addition to about 24,000 units in Hanoi.

Supply of villas and townhouses falling, too

In Hanoi, 8 newly launched projects and 2 new phases supplied about 790 new dwellings in Q2 2020, up 17% q-o-q but down 44% y-o-y, according to Savills. Tay Ho District accounted for most of the new supply with Sunshine Group Ciputra projects.

Recently, the Vietnam Association of Realtors (VARS) has urged the government to relax foreign homeownership restrictions. “The association is suggesting the government extends the foreign ownership cap from the current 30% of apartments in any given project to 50%,” said Tran Minh Hoang, VARS deputy general secretary.

“Non-nationals with high capital are not really interested in mid-end and affordable like Vietnamese people. They are on the market for luxury and high-end properties so they would not pose competition to local buyers – and developers could increase their sales,” Hoang added.

During 2019, foreign direct investment (FDI) reached a decade-high US$38 billion.

There are about 83,500 foreigners currently living in Vietnam. And in 2019, the total number of foreign arrivals surged 16.2% to a record 18 million people, according to the country’s General Statistics Office (GSO).

In addition, the Construction Ministry has also proposed recently to allow foreign investors to own hospitality properties like condotels and villas. Currently, there is no regulation on ownership of hospitality property in the country.

Vietnam opened up to foreigners five years ago. Through the Housing Law (Law on Housing No. 65/2014/QH13) which became effective on July 1, 2015, foreigners who have been granted a Vietnamese visa, plus foreign investment funds, banks, Vietnamese branches and representative offices of overseas companies can now purchase residential property. Foreigners can now own all types of properties, including condominiums and landed property such as villas and townhouses. Properties owned by foreigners can be sub-leased, inherited and collateralized.

For foreign individuals the house ownership period is 30 years, but it can be extended. The new law also limits foreigners from owning more than 30% of a single apartment building, or more than 350 houses and apartments in a ward, a subdistrict-level administrative area.

Detailed guidelines on implementing the Housing Law (Decree 99) became effective on December 10, 2015. According to Decree 99, foreigners are allowed to own houses in Vietnam as long as they were able to meet these conditions:

In theory, freehold land does not exist in Vietnam. Land can only be leased, even by Vietnamese; though in reality many leases seem to be for indefinite terms. “Buying” land is technically a transfer of leasing rights. The creation of a perpetually renewable lease means that Vietnam now has one of the most open property markets in Asia.

The Comprehensive and Progressive Agreement for Trans-Pacific Partnership (CPTPP), which came into force in January 2019, is a free trade agreement between Australia, Brunei Darussalam, Canada, Chile, Japan, Malaysia, Mexico, Peru, New Zealand, Singapore and Vietnam. The agreement is expected to benefit the real estate market.

In Hanoi, the average monthly apartment rent was US$26 per sq. m in Q2 2020, up 5% from a year earlier, according to Savills. However on a quarterly basis, rents in the capital city dropped slightly by 1% from the previous period. The average occupancy rate in Hanoi was 70% in Q2 2020, down 13 percentage points from a year ago.

The supply of serviced apartments in Hanoi fell by 2% y-o-y to 4,620 units in H1 2020. Seven projects with about 770 units are expected to enter the market this year.

In HCMC, serviced apartment rents averaged US$23 per sq. m per month in Q2 2020, down 6% y-o-y and 4% q-o-q, according to Savills. The average occupancy rate in the city fell to 61%, down 19 percentage points from the previous year.

Gross rental yields in Hanoi and Ho Chi Minh City – the return earned on the purchase price of a rental property, before taxation, vacancy costs, and other costs – are quite attractive. In Hanoi, yields remain high at around 4% to 7% last year, according to research conducted by the Global Property Guide. In HCMC, yields are slightly lower, at between 2.6% to 6.3%, depending on district.

In May 2020, the State Bank of Vietnam (SBV), the country’s central bank, lowered its benchmark refinancing rate by 50 basis points to 4.5%, following a 100 basis points rate cut in March 2020, in an effort to minimize the impact of the coronavirus pandemic on economic activity. Likewise, the discount rate was also lowered to 3%, from 3.5%.

In line with the central bank’s move, commercial banks have reduced their interest rates on home loans in recent months. In July 2020:

The Vietnamese mortgage market is still underdeveloped; most homebuyers pay cash. Developers are now starting to work with banks to offer mortgages to buyers, but high interest rates and strict loan procedures still hinder the local mortgage market. The loan-to-value (LTV) ratio rarely exceeds 50% of the appraised value of the property. The term period is usually 15 years.

Vietnam witnessed a prolonged housing crisis after the global crisis. Property prices plunged by double-digit figures. The government was embarrassed, banks were bankrupted, and the economy slowed sharply.

The banking system effectively collapsed. One out of every ten loans in the banking system stopped paying, according to the central bank, but Fitch Ratings believes the percentage of bad loans was higher.

To bolster demand, the government provided the real estate market with a US$1.4 billion stimulus package in 2013, subjected developers to stricter financial requirements, and bought US$8 billion of non-performing loans especially from the real estate sector. The central bank slashed the refinance rate and discount rate several times, and a VND5 trillion (US$220 million) credit package was given to homebuyers by the Vietnam Bank for Industry and Trade (Vietinbank). These measures were, over time, successful.

Economic growth slows amidst the pandemic

In 2019, the Vietnamese economy expanded by a robust 7% from a year earlier, at par from the previous year’s growth. However in Q2 2020, the economy grew by a meagre 0.36% compared to the same quarter last year, a sharp deceleration.

The IMF forecasts that Vietnam’s economic growth will slow to 2.7% this year, but the Vietnamese economy is expected to bounce back quickly in 2021 with a 7% growth.

The tourism industry registered a record of 18 million international visitors last year, up by 16.2% from a year earlier, according to the country’s General Statistics Office (GSO). However during the first half of 2020, international tourist arrivals to Vietnam plunged 55.8% to about 3.74 million people, mainly due to the government’s imposition of COVID-19 related travel restriction measures.

Consumer prices in the first eight months of 2020 increased 3.96% year-on-year, still under the government’s target of around 4%.

In January 2016, the central bank announced a move to a market-based exchange rate mechanism, setting daily reference exchange rates, to discourage hoarding of US dollars.

However the new rate is not really “free”. The central bank sets a reference rate daily, and local and foreign banks in Vietnam can trade within a band of plus or minus 3%. Since the implementation of the central bank’s decision, the dong has lost about 3.5% of its value against the US dollar, reaching an exchange rate of VND 23,200 = USD 1 by the end of August 2020.

Last year the US indicated that Vietnam is under scrutiny for possibly manipulating its currency. Finally in August 2020 the US Treasury confirmed that the dong was undervalued by about 4.7% against the dollar in 2019 due in part to “government action on the exchange rate.” According to the Treasury, Vietnam made US$22 billion state foreign exchange purchases last year, including through the central bank, which pushed down the country’s real effective exchange rate by 3.5% to 4.8%.